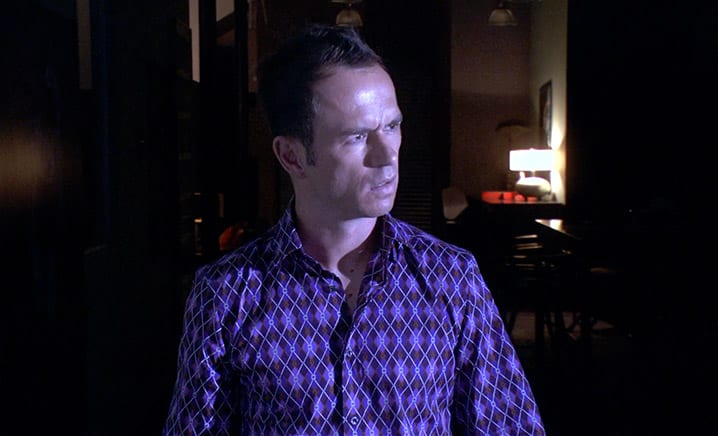 Lying stark naked on the floor of my trailer rehearsing my next scene up with Michael C. Hall the door swings open and John Lithgow walks in. “Oh my,” he exclaims, “Either I’m in the wrong trailer or…or…” John’s not often found without words. This is one of those occasions.

I pick myself up off the carpet, cover my body with a bathrobe and say what any self-respecting Englishman would given the circumstances… “Stay for a cup of tea?”

John and I exchange pleasantries while sipping tea for half an hour before I politely excuse myself to get back to preparing for the definitive moment of being serially killed on the Showtime television series Dexter.

After final touches in the hair and makeup trailer I head to set, a derelict warehouse in downtown Los Angeles. It’s a particularly hot afternoon.

I remove my bathrobe and the props and wardrobe department start tightly wrapping my entire body in cellophane before I’m lifted onto a cold stone slab. My body temperature is rising and I start sweating profusely which causes the cellophane to keep coming unstuck.

Michael and I discuss the scene with the director and go over his blocking before running the lines, then the crew is invited in to watch the scene. After rehearsal I’d normally return to my trailer to prepare for a scene while the crew make adjustments to lighting and camera placement, although today I decide to stay on set as part of my process. Trapped, overheating, naked, vulnerable and afraid. I want to feel as uncomfortable as possible for when camera starts rolling, and lying naked tightly wrapped in cellophane on a cold stone slab in a derelict warehouse on location in downtown LA surrounded by a busy television crew helps my sense preparedness.

1st Team is Up

Michael arrives back on set, senses my ‘uncomfortable readiness’ and asks if I’d like to start shooting right away (as opposed to another rehearsal). I accept his thoughtful invitation with a restricted and somewhat sweaty nod of the head. After a quick check on where he’ll slice open my cheek with the scalpel and the best angle to raise up the meat cleaver before the fatal blow to chop off my head at the end of the scene, we’re ready to shoot.

First positions are called for, as well as quiet on the set. Sound speeds. Camera rolls. Action is called. The first take goes quite well, although there’s a few technical hitches. We shoot the master one more time before moving in for coverage. The crew are professional and collaborative and move fast and efficiently. Like most successful tv shows, they have their flow down and express good camaraderie to boot. Time is money, and in the eight days it takes to shoot a one hour episode of television a small mistake can set you way back behind schedule, especially on location when there’s less control of the elements.

Michael and the director graciously ask if I’d like to do my close ups first. I decline, citing my desire to be as uncomfortable as possible when we turn around on me. On the second (and final) take of my close-up I lose myself in the art in flow and spit in Michael’s face when he’s inches away from me. Then, at the definitive moment Michael raises the meat cleaver and makes the downward motion to chop my head off…

My head is pounding, my face scratched but unscarred as the crew rush in after the final take and hastily remove the cellophane and my body breaths a huge sigh of relief.

Being serially killed on Dexter was a serious business. All in a day’s work.